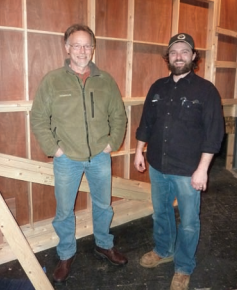 Making a motion picture often involves building elaborate sets and demolishing
those sets when filming is complete. But an increased environmental awareness
has made some in the industry think twice about throwing it all away.
The Reuse Center at Boston Building Resources was the happy recipient this past
summer of the materials used to construct a movie set in Swampscott. Materials from the set have been incorporated into homes of low- and moderate-income people in Boston and beyond, as well as a local project that is part of the nationwide Living Building Challenge.
It is brand new material, and there is nothing wrong with it, said Mike Krause, a member of the entertainment union known as the International Alliance of Theatrical Stage Employees. Mike and fellow union member Adam McClain, working with BBR donations manager Paul Kiefer, coordinated the donation of five truckloads of materials to the Reuse Center.
In the film (Grown Ups 2 with Adam Sandler, to be released in July), much of
the script is set at a nighttime outdoor party. To allow the crew to film nighttime
scenes during daytime working hours, the carpenters constructed the back side of
a house, patio, pool, and pool house in a field, where it was covered with a giant
tent to simulate night. Read Full Story