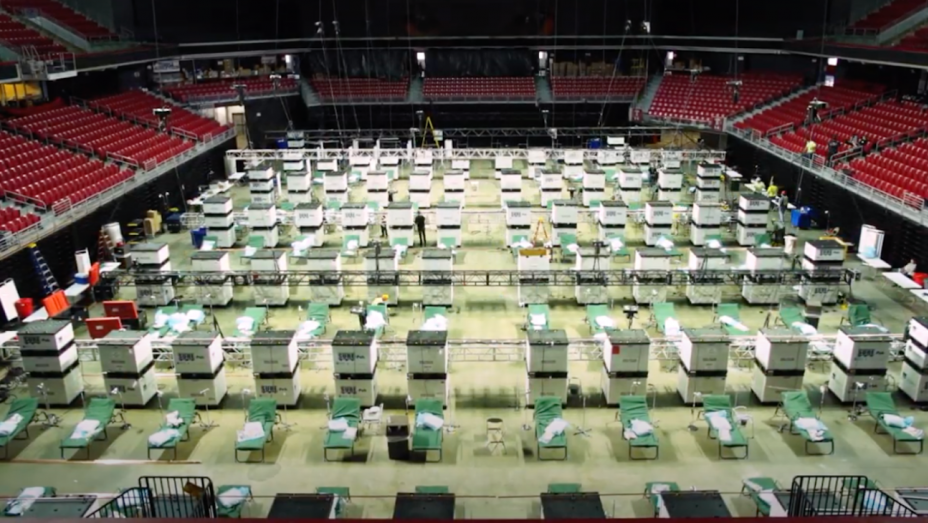 A temporary hospital was set up in April by IATSE stage technicians at the Liacouras Center, a concert and sports venue in Philadelphia.

Though many in the industry cheered in late March when some provisions in the CARES Act directly benefited entertainment workers, Hollywood's fight for further financial relief from the federal government is hardly over yet.

The International Alliance of Theatrical Stage Employees (IATSE), which represents 145,000 entertainment workers, made that clear when it published an ambitious political agenda for future coronavirus relief packages on Thursday. "IATSE Priorities for Subsequent COVID-19 Relief Legislation" offers up seven major goals for the labor union in its upcoming lobbying and activism: to persuade the Occupational Safety and Health Administration (OSHA) to issue emergency health standards for members working in television news and constructing field hospitals; to implement policies that protected pensions after the Great Recession; to extend Payment Protection Program (PPP) loans to all nonprofits (like labor unions), not just 501(c)3 organizations; to ensure health care for California's unemployed and in labor unions; to pass the Performing Artist Tax Parity Act (also an agenda item on actors' union SAG-AFTRA's slate); to extend CARE Act unemployment insurance through Dec. 31, 2020; and to gain financial stimulus funds to get the industry running again.

IATSE did not secure one of its agenda items - gaining PPP loans for all nonprofits - in the final version of the $484 billion package that Congress is poised to pass to replenish a fund providing interest-free loans to small businesses. However, the union is moving forward with all of these priorities for future legislation, says IATSE political and legislative director Tyler McIntosh. "We know for a fact that there is broad support amongst the Democratic Caucus and in the House," he says.

To further explain the union's political priorities, concerns among members and how IATSE is helping to prepare Hollywood to go back to work, McIntosh spoke to The Hollywood Reporter on Wednesday.

Why was now the right time for IATSE to issue these legislative priorities for future coronavirus relief packages?

Frankly, it's an existential moment for our members and a crisis that we as a union and as an industry, for that matter, have never faced. We've seen approximately 90 percent or more of our membership in the United States and Canada presently out of work. The entire entertainment industry is dark. With this degree of unemployment, we were incredibly active in the early going legislatively in what came to be known as the CARES Act. The second legislative package, the Families First Coronavirus Act, made some extensions to paid leave provisions federally. Most of our members are entertainment freelance workers who don't qualify for traditional paid leave or unemployment benefits because of the requirements for days worked on the job to qualify and things of that nature. So we had to [fight] tooth and nail and raise our voices together to get Congress to realize that our entire sector was really left out of the traditional unemployment benefits.

Now, as we shift our gaze to the ongoing crisis, which we anticipate will continue for quite some time, we have a lot of additional priorities that need to be addressed by Congress and subsequent legislation. Many of our members and locals have weighed in and made us aware of their concerns and the issues facing them on a day-to-day basis. All of that was taken under consideration in formulating these subsequent priorities.

What is the union currently doing to try and get this list in front of legislators?

This has been circulated by the political legislative department of IATSE to Capitol Hill at this point, and we are in the process of creating a follow-on grassroots campaign similar to one that we're doing to highlight Congress' work: We have a campaign underway that is a genuine thank-you campaign to Congress to commend them for including entertainment workers in the CARES Act. We anticipate members will continue to make their voices known and highlight these specific priorities for CARES 2.0 or "Phase 4" or whatever this next package ends up being dubbed that hopefully will come together in the coming weeks.

Have any of these priorities been addressed in the $484 billion package to replenish funds intended to help small businesses that the Senate passed Tuesday?

Unfortunately not, [though] we did do some significant lobbying of Congress. We did work very diligently to raise our voices on one particular issue within that bill and that is the fact that within the Paycheck Protection Program, small businesses are eligible for those low-interest loans, as are 501(c)3 nonprofit organizations. However, we made a big push to provide fair access to that economic support for all nonprofits including labor unions, which are organized as 501(c)5s, and were left out of that support program. We have over 320 U.S. locals right now that are facing reductions in dues and the financial constraints of folks being out of work. So they're having to try to make their budgets work and loan access is certainly something that would have been beneficial to them in this package. Unfortunately, there was seemingly not an appetite to expand the eligibility for PPP loans to other nonprofits - we are going to continue to prioritize that in subsequent legislation. We know for a fact that there is broad support amongst the Democratic Caucus and in the House. There's also a "Dear Colleague" letter that was authored by Judy Chu from California, Alan Lowenthal from California and Sylvia Garcia from Texas that's circulating around the House right now requesting that 501(c)5 organizations be eligible for this funding.

One of the priorities listed is for OSHA to take immediate emergency steps to protect news media workers and workers converting facilities into hospitals. Why would this be the right step to protect these workers as opposed to other measures, like asking for more paid sick leave?

In terms of why requiring OSHA to issue a temporary emergency standard is the way to go, I want to be clear that this is not an either/or proposition here. I would say providing appropriate paid leave and providing hazard pay for these folks on the front lines is vital and, frankly, they are owed this for putting their lives on the line and lending their skills. The answer is not to say, "You're getting paid more to put your life on the line." The health and safety of our members is paramount, so getting a federal mandate from OSHA in terms of protective equipment and social distancing guidelines is absolutely vital in addition to the economic benefits that need to be provided to these people on the front lines. It's an all-inclusive approach in addition to the other benefits that we continue to push for.

You've devoted a priority on this list to entertainment-employee pensions as well. Why are they particularly in danger at this time?

In terms of the International [organization], we have two major pension plans that are administered, and that's the Motion Picture Industry Pension Plan and the IATSE National Pension Fund. Both of those pension plans would be considered healthy pension plans and they were certainly in the "green zone" for ranking the health of these pension plans. What endangers them, really, is market volatility. When you see such a drastic effect in the stock market, naturally you are going to see a shock to the funds in the pension plan. Really what we need to do is be allowed things that have happened in previous recoveries, like what we saw in the Great Recession in 2008: the ability to freeze that status as being "green zone" as they were before, and the ability to smooth those losses over time. [Those measures] are important for us to be able to continue to have them be considered as they were and not have additional burden placed on these plans.

The other really important part is just that we recognize that direct federal relief is going to be needed for the Pension Benefit Guaranty Corporation to deal with those multiemployer plans that are critically endangered. But the first principal needs to be to "do no harm" to healthy pension plans. We have healthy plans and we have promised benefits to our retirees, so any shoring up of the PBGC cannot come at the expense of healthy plans.

In one priority list item, you say that unemployment benefits that go to entertainment workers should be extended until Dec. 31, 2020. Are you projecting that workers won't be able to go back to business as usual until 2021?

The only certainty at this point is uncertainty. I think everyone in the entertainment industry workers, employers and frankly those who enjoy arts and entertainment recognize that this is an industry that is going to be disproportionately impacted for much longer than other industries are. We were some of the first affected; we are also going to be some of the ones who are probably last to resume normal operations even after stay-at-home orders in states start to get relaxed and we start to see some of this opening of states and economies. We are still going to see restrictions on mass gatherings for quite some time to come, so that will affect all of our live events and productions, whether they're theatrical or trade shows or sporting events: You're going to see decreased attendance because of the need to have appropriate distancing.

We're not sure what the guidelines are going to be in terms of safety and I think it would be premature to predict what that will look like, but we do know that these are going to be long-term impacts and we need to prepare for that and recognize that we likely will not get back to our full employment levels that we were at just two months ago until quite some time from now, even if we do see a bulk of our folks going back to work before the end of the year, which is of course our hope. We want to put folks back to work, but we want it to be done safely and we need to recognize that we're still going to have folks who are going to need access to these expanded unemployment provisions and benefits for quite some time to come.

Do you project you will be sending out more of these legislative priorities agendas in weeks and months to come, as further relief bills are being discussed?

Our reality is that we have be nimble and have the ability to react to the needs of our membership and that's what we'll continue to do. I think this document and these priorities have been laid out with the long term in mind. We hope to achieve a lot of these things in the short term, but some of these items are going to be long-term priorities that we're going to have to continue to persist on. I would say we could surely see some other priorities arise as time goes on, but for now we anticipate that this will be our main focus in addition to working closely with some of our major employers across the country on some joint priorities to make sure that our industry is heard from and make sure that we're able to safely and quickly put folks back to work but within reasonable and safe guidelines.

CLICK HERE to see the original article as it appears in the Hollywood Reporter.