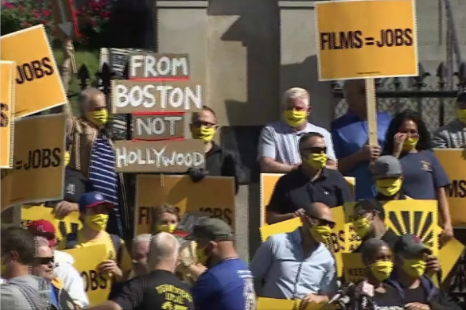 Mass. currently provides filmmakers with a package of tax incentives to encourage them to film in the state; however, the Senate proposed changes that would cut many of those incentives back.

Protestors say it’s bad for the industry and the state economy.

“It would devastate the industry to the point where jobs that would normally come to this state would go to California, would go to Georgia, would go to New York,” sound mixer Aaron Bouchard said. “It would leave a lot of us unemployed.”

Adam Roffman, an on-set dresser, added, “The film tax incentive was just amazing for us, for many of my friends, and for thousands of small businesses we’ve seen reap the benefits of the film industry here.”

Protestors continued that the industry doesn’t just create jobs and generate millions for the economy, but it also brings star power to the state.

Recently, George Clooney and Ben Affleck were spotted in different parts of Mass. for an upcoming movie.

Jennifer Lawrence was also in Boston filming her next movie with Leonardo DiCaprio.

The incentive program is scheduled to end in December 2022.

The Mass. House unanimously approved to renew the program and lift the expiration date.

Protestors say they hope they can convince the Senate to do the same so they can continue to work in the Bay State.

“I want to be here in Massachusetts,” actress Andrea Lyman said. “It’s my hometown, it’s where I grew up, and if the film tax incentive goes away, I’ll have to move where the work is.”

Major film and TV productions are making decisions now about where to film in the coming years, and protestors say uncertainty about the future of the state’s production incentive could encourage them to film elsewhere.